Fox News’ Tucker Carlson has discovered connections between Tony P and Manafort. Tony wants all Carlson’s previous reporting on this to be removed from the archives. He is threatening a law suit. Interesting.

But why step down? Politically Tony probably has nothing to fear. The media will go to bat for him. He can call upon DC’s finest lawyers – if that’s not an oxymoron. The Democrats will stick up for him. He has the support of the Clinton machine. People like him just don’t go down.

Maybe he fears that some unsavory bits of his personal life may get exposed. Such as his extensive, valuable art collection.

It’s not the kinds of pieces of great masters you might expect. It appears to center on the grotesque and immoral. For instance, his bedroom features photographs from Katy Grannan. Her specialty is nude teenagers in their parents’ home. Not something most people have on their walls.

Or it could be the hanging sculpture he has. It’s modeled after a photo found of one of the victims of murderer Jeffery Dahmer. Here’s the sculpture and the original photo: 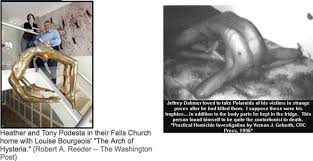 It reminded me of this from Wikileaks. It came out almost a year ago today:

In what is undoubtedly the most bizarre Wikileaks revelation to date, Clinton campaign chairman John Podesta was invited to a “spirit cooking dinner” by performance artist Marina Abramovic, to take part in an occult ritual founded by Satanist Aleister Crowley.

In an email dated June 28, 2015, Abramovic wrote, “I am so looking forward to the Spirit Cooking dinner at my place. Do you think you will be able to let me know if your brother is joining? All my love, Marina.”

Tony Podesta then forwarded the email to his brother John Podesta (Hillary Clinton’s campaign chairman), asking him, “Are you in NYC Thursday July 9 Marina wants you to come to dinner.”

Spirit cooking refers to “a sacrament in the religion of Thelema which was founded by Aleister Crowley” and involves an occult performance during which menstrual blood, breast milk, urine and sperm are used to create a “painting”.

Looks like the Podestas have a lot more on their plate than it appears.