Leave it to uber liberal Chuck Schumer to find a way to ruin everyone’s Thanksgiving.

Well, that’s not to ignore GQ (that of the Colin Kapernick loving magazine) who also want to make your Thanksgiving an episode of Game of Thrones while there are serious knives and copious alcohol abounding. They ran this article: “It’s Your Civic Duty to Ruin Thanksgiving by Bringing Up Trump.” The subhead is “This Turkey Day, consider making life HELL for a few of your relatives.”

Here are their tips:

Don’t show up. For some parents, your absence will speak louder than any sodden arguments over the density of pumpkin pie. If you can’t even look them in the eye, they’ll know you mean business. Besides, Friendsgiving rules.

Show up and be kind of an asshole. No hugs; only stiff, formal handshakes. During the football game, talk about police brutality nonstop. Take any opportunity to emphasize just how much Bruce Springsteen and the entire E Street band loathes Trump. Come out as an aspiring professional DJ.

Scorched Earth. Not even a handshake; just stare, disgustedly, at their outstretched arms. Build a wall out of mashed potatoes. During the football game, order 10 Papa John’s pizzas—the official foodstuff of the alt right—and use them as pie charts to demonstrate who benefits most from the GOP tax plan. Refuse to be alone in a room with your mom, citing the Mike Pence rule. Call your parents by a Donald Trump nickname of your choosing—perhaps Little Rocket Mom or Liddle’ Dad. Insist on setting a place for Robert Mueller, the way Jews do for Elijah on Passover. Wear a coal miner hat for solidarity. Punch a cornucopia right in the mouth.

Of course, this is about more than just spite—as satisfying as spite can be in these trying times. This is about potentially chipping away at the ~35 percent of un-budging Trump supporters. Sure, some of them are fully on board with every inexplicable decision, but others may be swayable. They are Fox News devotees who have simply internalized the message that all negative news about Trump is fake news. They know the president is unpopular, but they think his unpopularity is the strict province of haters and losers. It might be different when it’s their own child—who probably isn’t an Antifa supersoldier and who definitely doesn’t have loser genes—weighing in with cold hard facts. Having a son or daughter loathe everything you’ve become is easier long distance; it’s another thing when that kid is staring turkey-carving daggers at you from across the table.

If your family is unmoved after a ruined Thanksgiving, though, that’s fine too. After all, next year’s Thanksgiving falls just after the 2018 midterms, and if your true believer parents still feel the way they do now, you might ruin their holiday in another way.

The Senate Minority Leader agrees and has some more tips. Schumer instructed his followers to bring a chart from a left-leaning think tank on the Republican tax plan to their holiday dinner in case a relative “tells you the Republican tax bill helps the middle class.”
He also suggested in a follow up tweet that you have this image ready on your phone: 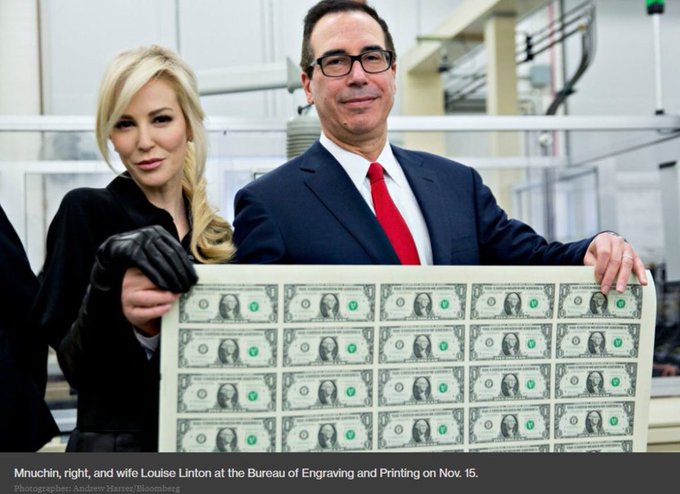 It’s Secretary Steven Mnuchin and his wife, Louise, posing with a newly printed sheet of dollar bills with his signature. That ought to make them resent their capitalist masters and join the revolution, pardon me, resistance, eh?

I’m sure GQ and Schumer would encourage liberals to freestyle it as well. Inject some snark into that turkey by saying something like “Could one of you racist, Islamaphobe, Confederate loving knuckledraggers down the table pass the gravy? And could you pass on the racist, stuuupid, CEO enriching GOP tax reform package while you’re at it?”

That would go over well.

Or they might try “I guess you would say today’s weather is nice, you climate change denying, selfish fan of the orange haired rapist monster who is nothing but a reality show con man celebritard! Don’t you know that a typical November day just means weather has gone crazy and we’ll all fry soon?”

Surely that would rally us to their cause!

Most of us conservatives will just keep our lips zipped. We know that inside they are still burning mad about the election and acting like toddlers who just had their Juicy Juice taken away. Most of us will smile to ourselves. If Trump is getting this kind of reaction, he’s serving up just what we ordered.

Go ahead, have another piece of gloat filled pie! Like revenge, it may taste even better cold.