It wasn’t the kind of speech Obama gave. It had few “I’s” and was short on vacuous rhetoric.

Trump’s state of the union speech was about the American people and Trump’s speech was superb.

It showed that we were right to elect someone outside of the political circus because that someone was us.

Some thoughts and observations:

The Dem women were dressed in black, the color of mourning, as a protest. Melania was all in white. The contrast couldn’t have been sharper.

When Trump began and he mentioned bipartisanship, the camera turned to Nancy Pelosi. She was seething. She was also playing around with her mouth which led many people on Twitter to think she has denture problems. I don’t know. Perhaps she was gurning?

Loved how he described the past year’s economic successes. You know, the ones the media refuses to mention: 401 K and pensions growing; 8 trillion added to the stock market; tax reforms enacted; Hispanic unemployment at the lowest ever while black unemployment the lowest in decades.

That didn’t make the Dems happy. They continued their sourpuss look.

Trump mentioned “our new American moment.” To baby boomers like me, it was wonderful to think that America’s greatest years might be beginning and not something we missed. He said we were “rediscovering the American way.” It’s been lost all right and we want it back.

Trump reiterated that our motto is “In God We Trust.” How wonderful to hear the G word again. Not to Democrats who refused even to applaud God. Somehow, I don’t think that’s going to help them.

Good touching on the flag issue, too, with the 12 year old boy there to show how it’s done. The boy saw to it that 40,000 flags were put on soldiers’ graves. Trump contrasted that with not standing for the national anthem. He didn’t need to say more.

I wondered how anyone with the dementia he’s supposed to have could give a speech like this. That was a lot of focus and awareness for an hour and a half.

Could you argue with reducing the price of prescription drugs? Evidently the Dems can. I wish the camera had panned on West Virginia Senator Joe Manchin at that one. His daughter is the one responsible for the huge jump in price for the epi pen. Maybe he’s not on board.

Manchin was one of the few Dems who jumped up on the mention of bettering our infrastructure. Then again, he’s from West Virginia which has always wallowed in expensive infrastructure as long as it could be named after a Democrat.

Did you see Tim Kaine clapping? 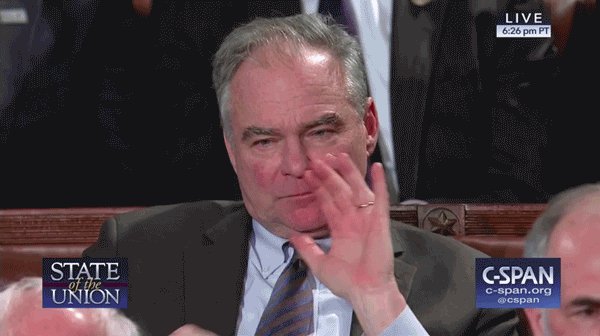 He looked like he hadn’t mastered it yet. Maybe because he was scowling so much he couldn’t coordinate that and his hands, too.

Dems rarely stood while the Republicans hopped up at every other line. Pundit Ben Shapiro tweeted that it was “smart of Vice President Pence to put superglue on their seats. They looked bad.” They did, too.

The second winning line mentioned – and the best – was “Americans are dreamers, too.” That slapped the Dems good, especially since, as he pointed out, lower class and black Americans get pushed out of jobs by them. Home run.

Somehow Marco Rubio joined the Dems in their curmudgeon-hood. He looked like he had just eaten hakarl, the national dish of Iceland made of pickled and 4 month fermented shark.
Maybe he needed a glass of water.

The Dems didn’t stand either when Trump mentioned the Communists and tyrants in Cuba and Venezuela. Then again, that’s where they tried to head us.

Like the seasoned public relations expert he is, Trump saved the best guest for last. He talked about North Korea and pointed to a former resident of that country who had lost a leg when a train ran over him. He had to recover without pain killers, made his escape but kept his crutches. The man held them up in a Tiny Tim moment that would have made Charles Dickens proud. It drew thunderous applause and tears.

When even grumpy pollster Frank Luntz says “Wow!” about the speech, you know it was superb.

It was and it showed that Trump is presidential, deserved the win and is a president very much in charge.