Looks like Bill Hagerty will be Tennessee’s next senator.

Everyone knew the real fight for the seat was in the Republican primary. However, it didn’t turn out to be as tight as “experts” and “polls” thought.

Don Johnson, formerly of the Shelby GOP and all around election guru, shared these maps of how the vote went:

As Johnson notes, the top votes – 76% – for Hagerty were in Lauderdale county; for Sethi – 57% – this occurred in Coffee county. 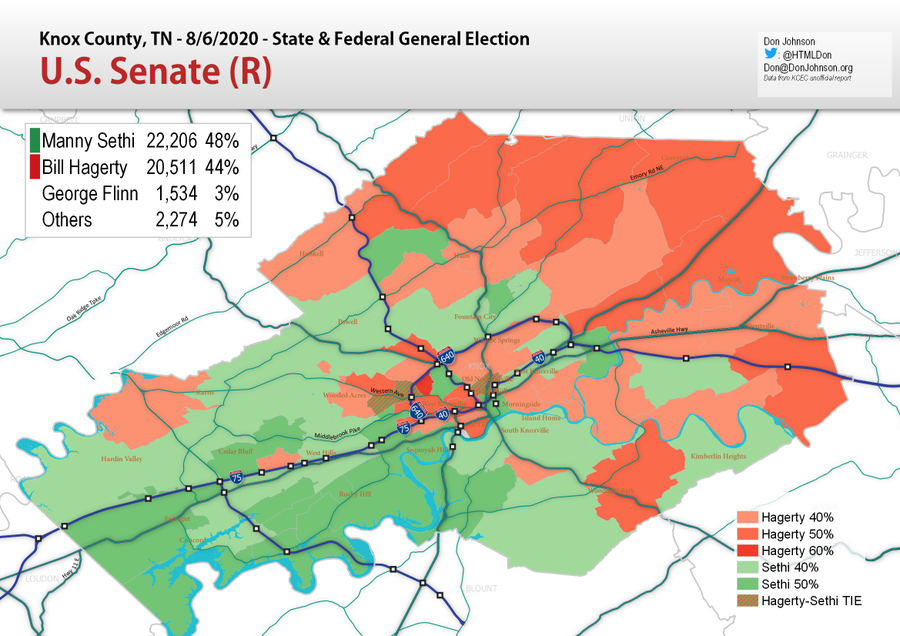 Obviously the Trump endorsement for Hagerty helped him tremendously. So did his negative ads which made Sethi unfairly unrecognizable as a conservative.

reitbart News was granted exclusive access to Hagerty’s campaign headquarters war room, where dozens of staffers in a local hotel conference room shouted out county-by-county results as they rolled in from across the state. For the first half hour, not a single county went Sethi’s way. and cheers were so loud that campaign staff closed the door so those in the hotel lobby more than 30 yards down the hall could not hear them.

An all star lineup of Hagerty’s biggest supporters joined him here on election night, including Sens. Marsha Blackburn (R-TN) and Tom Cotton (R-AR) as well as Rep. Chuck Fleischmann (R-TN).

“Hey, everybody, a major reason for tonight—Sen. Blackburn,” Ward Baker, the top adviser for the Hagerty campaign, yelled to the room when the senator joined the war room staff shortly after 7:30 p.m. as Hagerty opened a major lead over Sethi in the early returns.

Baker gave similar heroes’ welcomes to Cotton and Fleischmann, as well as to Breitbart News—whom he told the staff in the war room is the nation’s leading conservative publication and a “must-read.”

“I haven’t seen a war room like this ever,” Fleischmann said as the staff shouted out county results as they were confirmed.

The president personally recruited Hagerty, a longtime Trump loyalist, to leave his post in Japan and come back to run for the vacant Senate seat left open by the retiring longtime Sen. Lamar Alexander (R-TN). Trump even endorsed Hagerty several days before he officially announced his campaign, making Hagerty his first endorsement of the cycle in 2020—and one that the president has worked hard at over the more-than-a-year since ensuring Hagerty was successful. Trump has done multiple virtual events with Hagerty, and his son, Donald Trump, Jr., campaigned with Hagerty in Tennessee before the coronavirus pandemic upended in-person campaigning. He’s flooded social media with pro-Hagerty messages, and sent his top surrogates in on Hagerty’s behalf. Trump had been planning to hold a campaign rally in Tennessee with Hagerty, but since he is not doing the rallies anymore during the pandemic, the president held a series of tele-townhalls with his former ambassador to Japan, including one the night before the election. Vice President Mike Pence also endorsed Hagerty, meaning the White House—and Trump and his team—were all in on this one.

It paid off. Thursday’s results saw Hagerty win by more than 13 percent when the race was called by the New York Times and the Associated Press. When Baker and others announced to the room that the Times had called the race for Hagerty, the war room erupted in applause.

Hagerty’s message was nearly identical to Trump’s message: Tough on China, law and order, rebuilding the economy, and sending a fighter to Washington.