We have our Obama songs. We now have an Obama flag.

Now we have the Obama salute.

According to Redstate.com, the Obama campaign “wants you to send in photos of you giving the official party salute with something written on your hand.”

Hmm. Seems other Fascist movement have also insisted on some kind of salute. 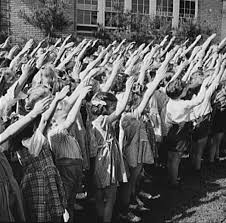 And let’s not forget his poster, logo and image plastered everywhere in 2008. That seems familiar territory too, tyrannically speaking.

If alarm bells don’t go off for you with all this, you’ve already forgotten what it is to be free.

Redstate’s author sums it up nicely:

Outside its brazen embrace of socialism, the most troubling aspect of this administration has been the creepy personality cult (and I mean that both ways) that is cultivated about Barack Obama. The cult is unsettling because Obama is one of the least inspiring men we’ve ever elected to the office. He has no charm, no recognizable people skills, no real interest in the job, no affection for the nation, and yet we see this man hailed as a “light worker.” We see him featured on the cover of a major news magazine with a halo. One has to worry about the spiritual and emotional hollowness of the people who flock to this man and pour their empty dreams into his equally empty soul.

I think this guy has the right response. Governor Perry tweeted this picture, making fun of Obama not remembering our debt when asked by David Letterman.