Fox & Friends cohost Steve Doocy has coddled his reputation as one of the nicest guys you’d meet. He’s Mr. America Next Door. He’s the dad everyone wants. He’s the husband who helps his wife make dinner and collaborated with her on a cookbook. He frequently refers to his children, often throwing in anecdotes on their wacky escapades together.

Who could be more wholesome?

Doocy has also cultivated his Kansas roots as proof of his inherent conservatism.

When he was accused of sexism by co-host Gretchen Carlson, it seemed out of character.

How you have to wonder. He seems to have done a complete 180 on President Trump. Isn’t that convenient since Fox has veered to the Left?

I have not watched the network since their November 3rd premature and reckless call of Arizona for Biden. I did hear about the recent verbal scuffle between Doocey and co-host Brian Kilmeade.

Kilmeade had the day before voiced his opinion that the House should not impeach Trump, especially with just a week of his term to go. He said, “If Mitch McConnell is such a great politician does he understand that, as Brit Hume has said and Jonathan Swan has reported, there’s no sign the president’s lost his base? So if you actually want to build on the president’s base and bring the party in a subtle or dramatic new direction, why do it without them with only days left? It makes no sense!”
Then: Steve Doocy: “The Congress was under attack last week. It was looted. There was a riot.”

Brian Kilmeade: “So was Portland every day, and nobody cared on the left!”

Steve: “Brian … Brian … I don’t think what they were doing in Portland was trying to overthrow the democracy.”

Later, Doocy added to it.

“Let’s put the shoe on the other foot,” he noted. “If a Democrat president did what happened last week, would the Republicans in the House and Senate vote to impeach him if they could? The answer is yes.”

Kilmeade, meanwhile, loudly complained that impeachment was unnecessary since Trump only had a week left in office, arguing that it made “no sense” since he was “leaving anyway.”

This is exactly why Fox is hemorrhaging viewers. Snap it off and don’t go back. It will only infuriate you.

Yesterday Raheem Kassam, the editor of TheNationalPulse and member of Steve Bannon’s War Room, tweeted this.  As he pointed out, none of it was untrue.

Twitter then placed a label on the tweet noting “this claim of election fraud is disputed, and this Tweet can’t be replied to, Retweeted, or liked due to a risk of violence.”

And they denied him tweeting privileges for 12 hours. It doesn’t take much for the Tweet masters to come down on someone.

In the land of the free, they are putting up barbed wire around Washington DC. This even though there are no parades or viewing areas allowed for the inauguration of Joe Robinette Biden.

Police/National Guard have also been authorized to use lethal force if they feel it’s necessary.

We are now an occupied country.

Right now, Washington DC is being militarized in ways it has never been. Approximately 20,000 National Guard troops are stationed there even though there is not going to be an inaugural event open to the public or any parades. Rings of steel surround the Capitol and concrete blocks have been set up everywhere.

At first they said Biden would have a small inauguration because of Covid. For our own good, you know. More likely for Biden’s good since any crowd size would be compared to the 2017 Trump inauguration or that of Obama in 2009. Biden would not come off well with his tiny crowd size vs/ the huge Trump turnout.

Since the riot of January 6, that excuse appears to have been thrown out the window.

Instead, government officials and media people are comparing what happened at the riot January 6 to 9/11 even though it doesn’t match in any way with deaths or destruction. Was anything but a window even destroyed Jan. 6?

This allows them to promote two ideas.

1. Trump supporters are crazed and demented. They will resort to violence and assassinations if given the chance. Democrats via the media are successfully hiding the fact that the people who did the violence were Antifa and other groups bent on subverting and hijacking the rally. They weren’t the MAGA people who were still listening to President Trump deliver his speech miles away. It will be used as an attack on freedom of speech and freedom of assembly. Watch the FBI, CIA, Homeland Security and the National Intelligence Program to be given funds and abilities for keeping track of citizens. Never let a crisis go to waste, as they like to say.

It’s just another version of the lockdown we had for almost the past year.

2. It’s a blatant display of might aimed at citizens. Disagree with us or think differently than we do and here’s what you’ll face. It’s exactly what China does to its citizens or Russia. One wag asked if a military inauguration comes free with every Dominion election.

If anything like this had happened in 2017, liberals would have screamed. Madonna threatened to burn down the White House. Rioters burned businesses and attacked attendees at inaugural night parties. It went on all weekend. Remember the pussy hats? Yet our side allowed it because we believe in freedom of speech and assembly.

2021 will mark a new era and not one for true freedom lovers if the heart of our country, DC, shows.

Former Tennessee (Shelby County for ten years in fact) Congressman Harold Ford Jr. was interviewed on Fox. Don’t know about what since that network doesn’t exist anymore for me, but Ford was always someone they gave credit to for non existent bipartisanship. He has since slithered out of the picture. Maybe he hopes for a spot in the Biden administration.

Anyhow, look at the picture on the wall. Are the Democrats just flagrantly showing themselves now? 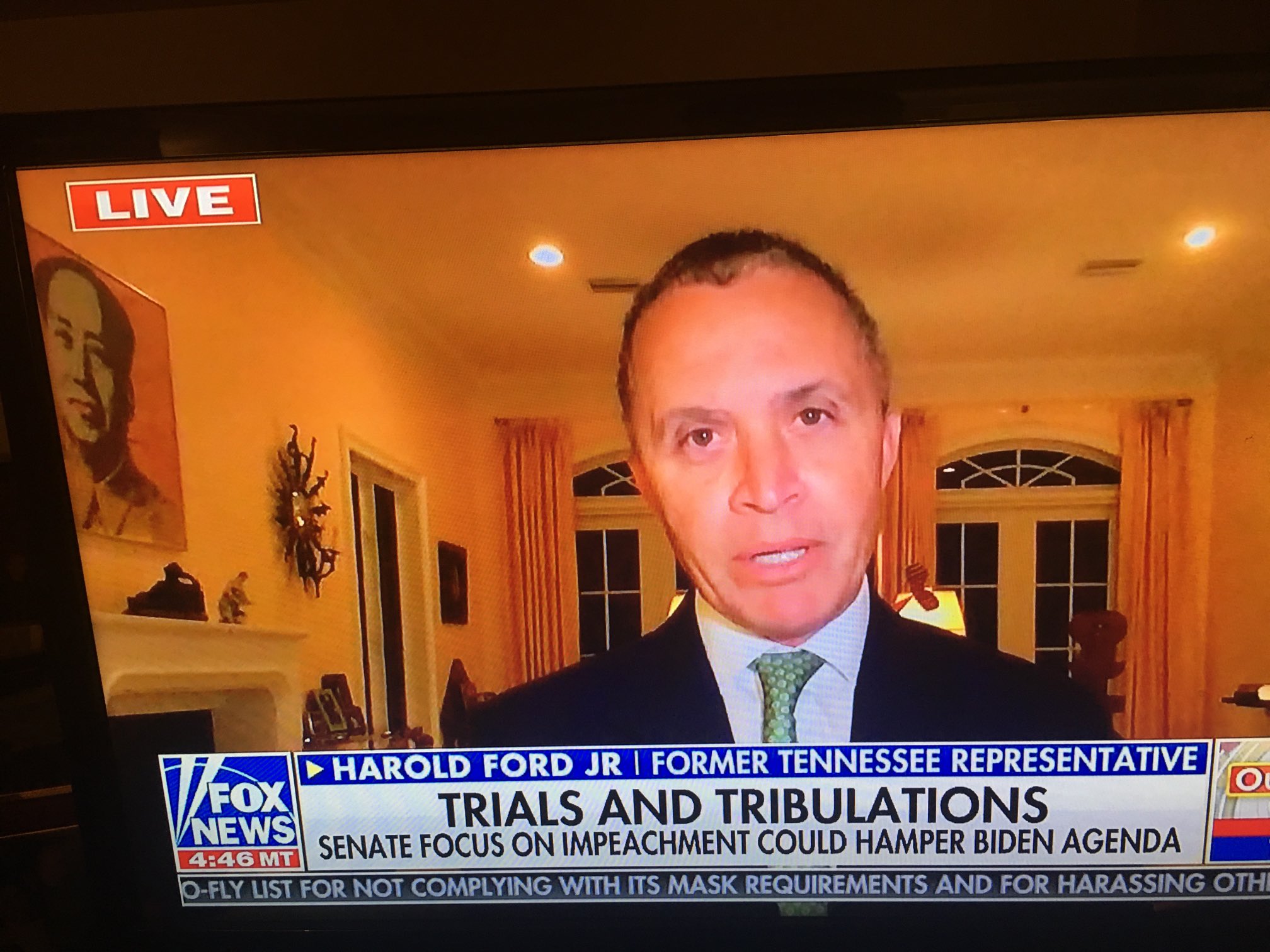