One of my favorite bloggers, Don Surber, wrote a book before the election called “Trump the Press.” It’s available in book form or on kindle. I am reading it on the latter.
Surber is a former newspaper reporter, now retired, who lives in West Virginia. His blog brings an honest newsman’s ability to see the truth, a West Virginian’s common sense about the world and a wit’s ability to make it all entertaining.

In Trump the Press he skewers the pundits and media who got the election so wrong. I love the part in almost each chapter where they assess that “peak Trump” has already happened. They say this dismissively, hoping primary voters will not be repelled by him. It is amusing as Surber writes it.

Others agree. They like the book, too. He’s gotten more than 100 5 star Amazon reviews.

Now, he’s followed up with a new one: “Trump the Establishment.” 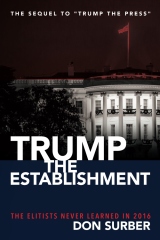 He provided a bit of chapter two to let you have the flavor of it:

The political prognosticators trusted most in Washington agreed: Charlie Cook, Stuart Rothenberg, and Professor Larry Sabato of the University of Virginia all agreed that Clinton would be the next president.

“Hillary Clinton has high negatives, particularly with independent voters, but if the Republican National Committee had commissioned a search firm to find a prominent Republican who would have the hardest time beating Clinton, it would be Donald Trump. Clinton’s strengths and weaknesses combine to give her a high floor but a low ceiling. Any Democrat expecting Clinton to win in a landslide is very likely to be disappointed, but at the same time, her chances of beating Trump are very good,” Charlie Cook wrote on May 5.

Of course, Cook wrote nine months earlier, on August 11, 2015, “Trump will never be the Republican nominee.”

If Cook were a surgeon instead of an election prognosticator, there would be a lot of people walking around with the wrong arm amputated…

If Cook were a quarterback instead of an election prognosticator, he’d play for the Cleveland Browns.

Rothenberg said early and often that Clinton would beat Trump, including this forecast three weeks before the election: “The trajectory of the 2016 presidential race—which will result in a Hillary Clinton victory—remains largely unchanged from May, when Donald Trump and Clinton were in the process of wrapping up their nominations.

“But what has changed recently is Clinton’s likely winning margin. For many weeks, even months, I have believed that Clinton would defeat Trump by three to six points. If anything, that range now looks a bit low, with the Democratic nominee apparently headed for a more convincing victory, quite possibly in the four-to-eight-point range.”

Of course, he too had blown off Trump’s chances of winning the nomination.

“We all know Trump is a carnival barker, not a credible contender for the Republican presidential nomination,” Rothenberg wrote on May 26, 2015.

Only in Washington could a man this wrong this often be considered an expert.

Sabato, too, did not think Trump could beat Clinton. In the spring of 2015, Sabato predicted the Democratic nominee would get at least 247 Electoral College votes and the Republican 206 with 85 up for grabs.

In the previous summer, Sabato said Trump would not win the nomination.

At the New York Times, Charles Blow had written on May 9, “Congratulations, Republicans, you’ve hitched yourselves to the madman-driven carriage, and it’s heading for the cliff.” Six months later, Blow wrote, “Donald J. Trump is president-elect of the United States. Now there’s a sentence I never thought I’d write.”

The book is available at Create Space, a subsidiary of Amazon. It will be available later at Amazon and other online retailers.
Kindle will come on March 1.

You are sure to enjoy it.