Dems are lining up to run against President Trump. They think they have a shot at taking him down in 2020.

OK, well so far we have a useless guy in Julian Castro (Can you imagine the vote Castro signs?). Then there is the terminally angry Fauxahontas, Elizabeth Warren, and the aged walking mishap, Joe Biden (he hasn’t officially declared yet, but indications are that he will) plus anti-Catholic bigot Kamala Harris who told everyone that her ancestral country, India, is the oldest democracy (since 1947!). Joining them is an attractive young woman congressman from Hawaii, Tulsi Gabbard. 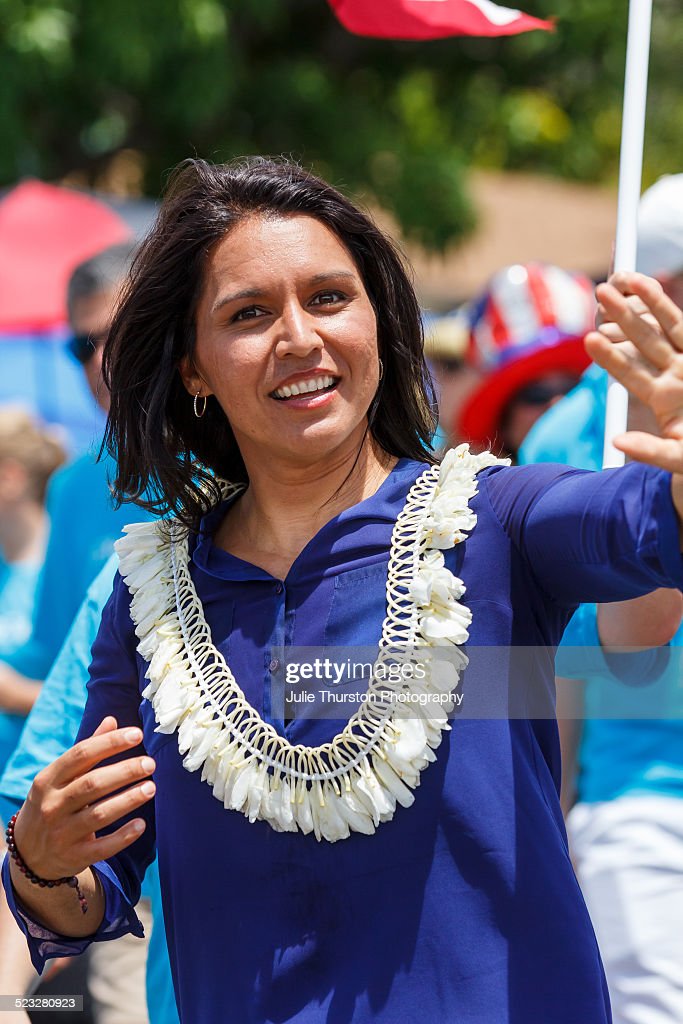 On paper, she might seem worthy. She’s a war veteran, seems amiable and hasn’t embarrassed herself – yet.
The only problem for them is that Gabbard is involved in a cult, lead by a guru. A fellow cult member describes it at medium.com:

The group I was involved in is called The Science of Identity Foundation, and it was started by a man called Chris Butler, who has variously been known as Siddhaswarupananda, Srila Prabhupada or Jagad Guru. His “philosophy” is a mishmash of Buddism, Vaishnava Hinduism and Christianity. There’s around 1,000 or so followers across Australia, New Zealand, Philippines and the US. Chris Butler himself was born in Hawaii and from what I’ve been able to glean from my research, was a college drop out who started a small group in the mid 60’s. When the Hare Krishna movement started gaining traction in Hawaii during this time, he found it difficult to find new followers and instead of competing with the Hare Krishna movement, decided to take his current followers, along with a $20,000 donation, and join the Hare Krishna’s instead.
During his tenure with the Hare Krishna movement, he struggled often with the leadership of the group (AC Bhaktivedante Swami who was his initiating spiritual master), and was repeatedly reprimanded by Bhaktivedante for publishing booklets expounding Chris’s own philisophical views. This was heavily frowned upon, and when he refused to curtail his actions, he was sent away to a small temple in New Zealand. It was during this time that he met a fellow Hare Krishna by the initiated name of Tusta Krishna Swami. They became close friends and when the relationship between Butler and AC Bhaktivedante Swami further fractured in the late 1970’s he and Tusta founded their own small group, bought a farm in Australia and all of his new followers left New Zealand for Australia around 1980–1981. My parents were amongst them.
I remember very clearly the plane ride to Australia, the mix of excitement and fear.

I also remember Chris Butler held this larger than life presence in my childhood. Everything I did I had to think about how it benefitted him. He was my parents spiritual master and they looked to him for guidance on everything, from what to eat, to how to raise their children, and they did it all without question. When I talk to people about the lack of questioning, they find that aspect odd. It is odd, but to put it into perspective, I was raised to believe Chris Butler was God’s voice on earth, and if you questioned him or offended him in any way, you were effectively offending God, and because we believed in reincarnation, that meant that you would be reborn as the lowest life form imaginable and then have to spend eons working your way back into God’s good graces. So questioning the leader was spiritual suicide, which was seen as worse than death. So no one questioned. Chris Butler also would ridicule the intelligence of anyone he didn’t like, belittling anyone he felt was questioning his authority even slightly. He demanded the utmost dedication and loyalty from his followers and if he didn’t get it, the punishments were swift and severe. I remember hearing stories of people who were told they weren’t allowed to eat because they didn’t make food to his liking, who were not allowed to sleep because there was a light making a buzzing noise in the house, and the follower didn’t have the foresight to fix the issue ahead of time.

Literally everything we did had to go through Chris. If you wanted to work outside of the group, you had to ask his permission. No-one could get married without his consent. From the late 80’s all of us kids were removed from public schools because he didn’t want them influencing our minds away from our service to him. So from that point we were home schooled, until there were schools established in the Philippines. After that all the children were sent to the boarding schools there for intensive schooling. From the small pieces of information that made it out of the schools to me, a lot of the kids were traumatised by the environment, as it was almost prison like. Classes were on hygiene and cooking and all the ways that they would need to serve Chris Butler best. It’s only speculation, but I am certain that this was because places like the US and Australia had standards of education that the home schools has to meet, and they just weren’t. They could avoid scrutiny by having the kids in boarding schools in the Philippines. I can’t even imagine how dreadful it was for my friends who got sent there. I was lucky to avoid it. I didn’t avoid the lack of schooling though, and by the time I officially left the Science of Identity Foundation in 1997, just before I turned 20, I had only received up to a 5th grade education.

From a young child I remember one of the main features of my life was the lectures that were sent to us via tape for us to listen to. Basically these were 1 hour long sessions of Chris talking about his beliefs – how evil and out of control gay people were, how women were inferior and sub human and should be controlled by their husbands, how messed up and evil the outside world was, and how his relationship with God was so special, only he could lead you back to Godhead (Heaven) and that he had so much control over his existence on earth, he could choose the moment of his death. We worshipped him, loved him even. Another part of his teachings was that all life is an illusion, and because of that all relationships were an illusion. We were encouraged to not invest in any relationships other than with him, so we were in effect isolated from our parents who did their best to not love us as per his recommendation, and instead looked at him like a surrogate father/messiah figure. He was this imposing force in our life that we weren’t supposed to offend, which is frankly terrifying when you’re a small child. I remember having many nightmares and a condition called sleep paralysis which can be brought on in times of great stress. My sister developed stress induced epilepsy during the time when we were supposed to be taken out of school. For my parents part, they did try to keep us in school for as long as they could, but when Chris heard parents were resisting him, his directive was clear – get them out or else. Every time my parents would try to take us to school, my sister would become hysterical and then she started having seizures. That was the power he had over us.

I really wanted to paint this picture of my childhood, because Tulsi Gabbard grew up in the same group that I did. She was subjected to the same environment I was. She’s still surrounded by this group and calls Chris Butler her guru. This is why the increased interest and her rise to power concerns me so greatly. I want to be very clear, I have no issue with Tulsi, as far as I am concerned, she’s as much a victim as I am, more so because she was groomed from an early age specifically for the path she is now on. What I am concerned about is the control I know Chris Butler has over her, the influence he has over her ability to make decisions, decisions that could become law and impact a whole lot of people. I know what an abusive, misogynistics, homophobic, germophobic, narcissistic nightmare Chris Butler is. And I know what kind of relationship he has with Tulsi…

Not only would she lose support for the position she holds, but she would lose her family, all of her friends, and this messiah/father figure if she opposed Chris Butler. She would be outcast from the only existence she has ever known. That’s a hugely powerful reason to continue to please Chris Butler without question.

I truly feel for Tulsi. Hers is not an enviable position. I know because I spoke out about Chris Butler a few years ago, and my family cut off all contact from me. This has happened to every other person I know of who got out. I hope one day Tulsi does reject Chris and finds her own voice. She has done amazing things and it makes me sad to think that another victim who was been abused and manipulated her whole life isn’t able to have the career she’s worked so hard for, free and clear of Chris’ toxic influence. Maybe one day she will, but while he is her guru, his influence over her makes her dangerous and unreliable, because Chris is dangerous and unpredictable.

Will you hear any of this from the media? Just like they did with Obama, they will hide any dubious connections she has. Question them and you become a racist or phobe of some kind.