The Memphis pastor who spoke out against Nike’s dumping the Betsy Ross flag on its shoes met with President Trump yesterday.

Rev. Bill Owens spoke with the president. He was mentioned by Rush Limbaugh for his support of the Betsy Ross flag and Limbaugh sent him a case of the pro Ross T shirts he had made. 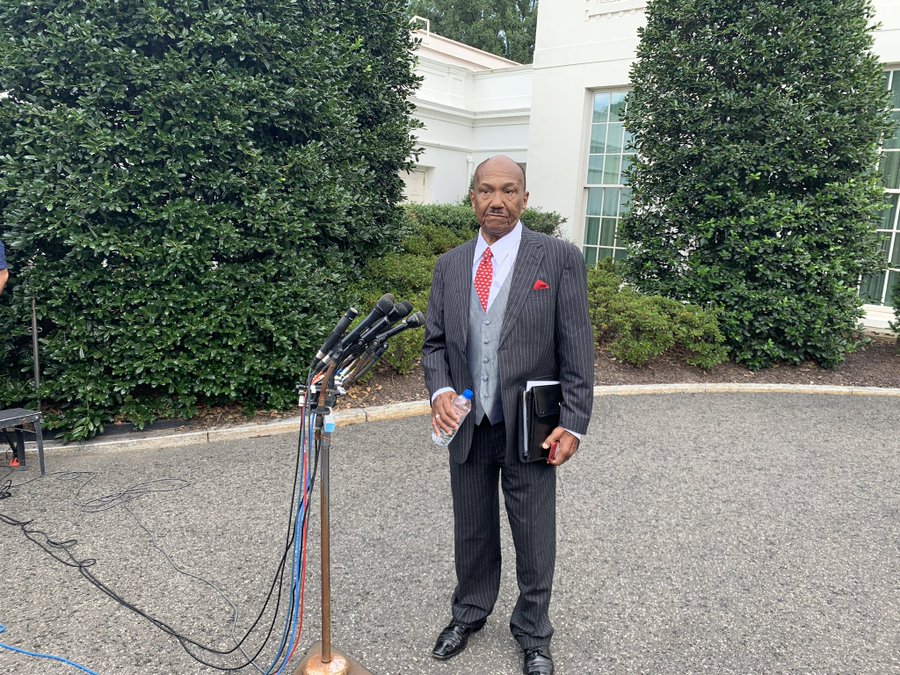 From the Daily Caller:

Reverend Bill Owens said Monday that he finds it “hard to believe” that President Donald Trump is racist after attending a meeting at the White House with other “inner city pastors.”

Trump revealed on Twitter that he would be meeting with the pastors, an event that was not initially on the president’s schedule. It is unclear if the event was added after critics accused the president of racism for tweeting that Baltimore, MD is infested with rats, and is a place that “no human being” would want to live. Owens claimed that the event was scheduled over a week ago and that it was not meant to be damage control.
Owens pushed back on the characterization of Trump’s comments about Baltimore as racist. Owens, who is 80-years-old and the president of the Coalition of African American Pastors, said “I know[s] [racism] when I see it.”

“I find that hard to believe that Trump is racist,” Owens told reporters, adding that he thinks the president could do more to speak out against racism.
“We discussed the issues facing the black community. There are many,” Owens explained, noting that Baltimore was not on the agenda for the meeting but that he thinks Trump should visit the city.

Owens has previously criticized ex-NFL star Colin Kaepernick for opposing the Betsy Ross flag and is a vocal supporter of the president.

Owens later appeared on CNN’s Don Lemon who went after him in this exchange:

DON LEMON: The question was what did the president say about his attacks against the leaders of color and did any of the faith leaders raise concerns about that?

Did anybody there raise concerns about what he’s been saying lately about people like Elijah Cummings or anyone?

LEMON: So I know it’s hard for you, you think it’s hard to believe that Trump is racist. But he’s repeatedly used racially charged language. He consistently attacks black and brown elected leaders. So, why is that hard to believe? Pastor?

OWENS: I find President Trump leader of all colors. He attacks who he will. He’s his own man. I can’t dictate what he should or shouldn’t do. But he does not just attack black people. He attacks anybody. And you know it.

LEMON: So as a man of faith, as a Christian he attacks anyone. It sounds like you’re condoning attacks? Is that Christianly or Godly?

LEMON: And is that okay with you?
OWENS: I’m not his judge.

Nothing about this meeting in today’s CA. Surprised?