John Nolte at Breitbart came across this tweet and an article in the New York Times that snarkily blames Southerners for big outbreaks.

In a bigoted effort to mislead its readers and demonize the American South, the far-left New York Times on Thursday manufactured a wildly misleading coronavirus map.

Using a desperately sweaty piece of reverse-engineering to make Southerners (and I’m a proud one, Yeeehaawwww) look as irresponsible as possible, the Times — a fake news outlet that hires racists, spreads deliberate misinformation, and has already smeared Christians as the cause of a coronavirus outbreak that’s currently hitting mostly secular, urban areas like New York — published a steaming pile of fake news.

“Where America Didn’t Stay Home Even as the Virus Spread” is the name of the piece (in an effort to stop the spread of misinformation I don’t link fake news), and using cell phone data, it shames large swaths of the country based on a pulled-from-the-human-butt metric of who is still driving more than two miles.

As you will see below in the New York Times map, the South is all lit up in shame-on-you-red because, as of March 26, we were still driving more than two miles: 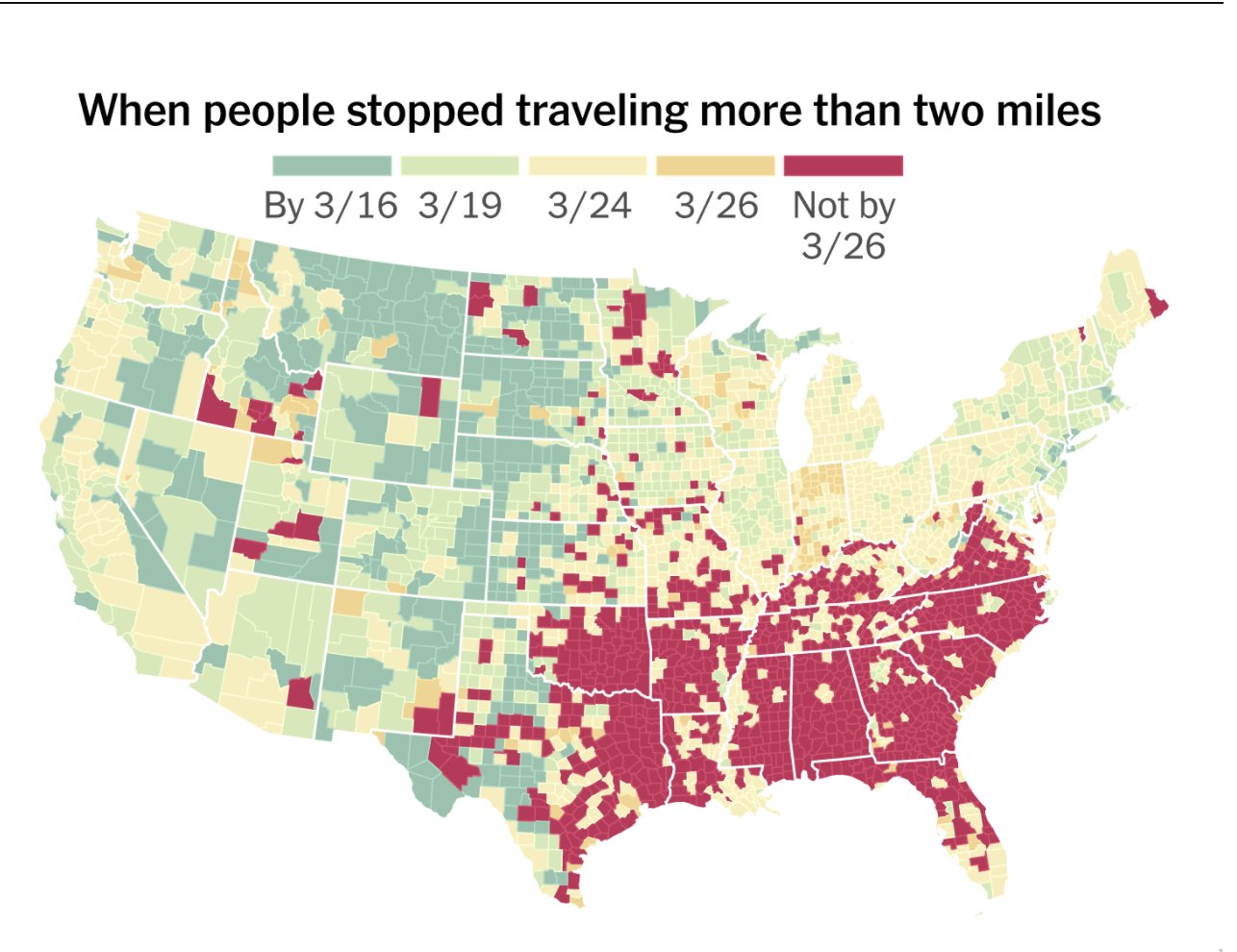 According to the Times, this map proves we hicks are not listening to the government’s stay-at-home-orders….

But all it really proves is that New York Times is staffed with dumbshits and provincial bigots.

For the New York Times-impaired, let me explain this as simply as I can…

If anyone asks where I live, I say, Pretty close to town.

Actually I say Pretty close to town, just past the airport and before you hit the Parkway, but you get my drift.

You want to know how close to town I am? I’m so close to town a fire hose on a town hydrant will reach my house, which means I enjoy the best of both worlds: I pay in-town fire insurance rates and out-of-town-property tax rates. How sweet is that, bitchez?

Anyway, even though I’m fire-hose-close-to-town, I’m still — wait for it, wait for it — 2.4 miles (according to The Google) from my closest grocery store.

So while I, a proud hick, was aggressively practicing social distancing three weeks before the stay-at-home order arrived from my Democrat governor on Monday, there’s nothing close to me — except for that small airport that doesn’t even have a soda machine. Which means…

Most people in my county, in my state, and my beloved South, don’t live pretty close to town, so of course they’re still driving more than two miles.

Almost everyone in my county has to drive more than two miles for groceries, to see a doctor, and to pick up medicine… But the last I read, there are only seven cases here. In fact, there are fewer than ten cases combined in my county and two neighboring counties. So let me assure you, most of us are driving more than two miles just to purchase food staples and medicine.

What’s more, unlike people in urban areas, who use mass transportation (cabs, subways, buses), which is a Petri dish for this virus, we drive alone or only with family members in our own vehicles. This is much, Much, MUCH safer than crowded subways and buses, or a cab that has been used by who-knows-how-many people before you jump in.

Here’s another thing the bubbled idiots as the Times can’t grasp… Two miles is not very far. Oh, it probably is when you’re an elitist living and working in Manhattan, but I was actually surprised to discover my grocery store is more than two miles away, because out here in the Real World, that’s what we call a Quick Pop Into Town.

Listen, I’m not here to cast blame. But what in the world does the New York Times think it’s doing blood-libeling the South when the worst outbreaks so far, and the worst outbreaks by far, are occurring within spitting distance of the Times’ own newsroom: New York, New Jersey, and Connecticut. As of April 2, there are 242,000 reported Wuhan virus cases in the U.S., and more than half come from those three states.

The South certainly has its fair share of cases, and there is no question that if we are not careful things could spike here. But as of now, the total number of cases in the entire South don’t come close to the number of cases in New York alone.

I have nothing but sympathy for the urban areas currently being slammed by this, but even per capita this is almost exclusively a major problem in urban areas, and the reasons why are obvious: denser populations, mass transit, and travelers from other countries.

Granted this could all change. By May, the curve might have flattened in urban areas as rural areas see a burst of infections. Nonetheless, even if that does happen, it will not change the fact that this New York Times piece is a bigoted, desperate, and stupid piece of fake news.

Believe me, the people of New York and San Francisco would have been much safer driving two or more miles in their own car than those who listened deranged Democrats — Bill de Blasio, Nancy Pelosi — who, as recently as March, were urging their citizens to congregate in Chinatown and enjoy Mardi Gras.

Anyway, if rural areas are such cesspools of irresponsibility, why are urbanites so desperate to flee to them?

(The author, by the way, lives in North Carolina.)