When I saw that Kamala Harris recently emerged looking a whole lot different than the previous Kamala Harris, I figured the plastic surgery indicated she was Biden’s VP pick.

After all, you can’t be from California and a celebrity without getting some surgical touch ups when your big role comes. The result was hideous, but I doubt anyone has told her that. 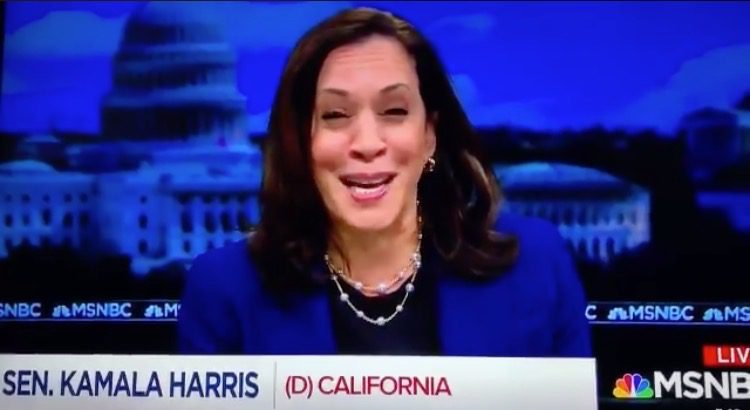 Her reputation for digging up dirt on others also indicated that she was tenaciously fighting for that VP spot. Apparently she did quite well finding stuff on Elizabeth Warren, Bernie, etc. for the presidential primary and has been peppering media with negative publicity about her potential veep rivals.

Becoming a vice presidential candidate can be a road to nowhere as her former paramour, Willie Brown, just this week tried to tell her. She became his mistress when he was mayor of San Francisco, another ploy she used to rise on the political ladder. Some like to call the campaign now Joe and the Hoe.

Then there is her negativity towards Biden at the debates. Many people echoed this tweet by George Papadopoulos: “How does a VP candidate who, in the last 6 months, has called the presidential candidate a liar, racist and predator add anything to Biden’s campaign? Once Biden remembers what he just did it will be too late.”

Comments from others range from the serious to the humorous. Here’s a sampling:

“I don’t understand this pick. She is the weakest of all the candidates. Being from CA, she will not bring any state votes (CA is already certain for the Dems). She accused Biden of being a racist and sex predator. She has never held a job outside of the public service. But most of all, she is a terrible campaigner – of all the Dem candidates, she came across as the most fake, the most pretentious, the most arrogant. The more you see of her, the less you like her. I don’t understand their logic in picking her. If they needed a black woman, they had far better options. It’s like they picked the best candidate for Trump to win.”

“Maybe they know President Trump is almost certain to win reelection. If so, letting Harris make herself into a failed repulsive loser would get her out of the way permanently.
She might just lose California…. people pretty much hate her.”

The National Review remembered this:
“Harris was a leader in the junta of Democratic state attorneys general that attempted to criminalize dissent in the matter of global warming, using her office’s investigatory powers to target and harass non-profit policy groups while she and her counterpart in New York attempted to shake down Exxon on phony fraud cases.

“Until she was stopped by a federal court, Harris was laying subpoenas on organizations such as the Americans for Prosperity Foundation, a conservative-leaning group that is critical of Democratic global-warming proposals. She demanded private information that the organizations were not legally obliged to disclose, including financial information and donor lists, in order to be able to subject the supporters of right-leaning groups to legal and financial harassment. This was, as a federal judge confirmed, an obvious and unquestionable violation of the First Amendment.

“It was also a serious abuse of power. Harris’s actions were coordinated with those of then attorney general Eric Schneiderman in New York, who argued — preposterously — that Exxon’s taking a different view of global warming was a form of securities fraud. This isn’t a conspiracy theory: They held a press conference and organized their effort into a committee, which they called AGs United for Clean Power.”

“I always thought she had two legs up on all.the other candidates.”
“Sleazy Joe just gave my wife a great reason to vote for Trump.She knows KamelToe is a tramp.”

Trump immediately let out this ad:

Trump has moved early to label her phony. It’s a good description. Remember that video of her dancing with young people?

It reeks of phony.

Trump has tagged her. Successfully.