You see them everywhere in Midtown. They are as common and frequent as a Joe Biden blunder, 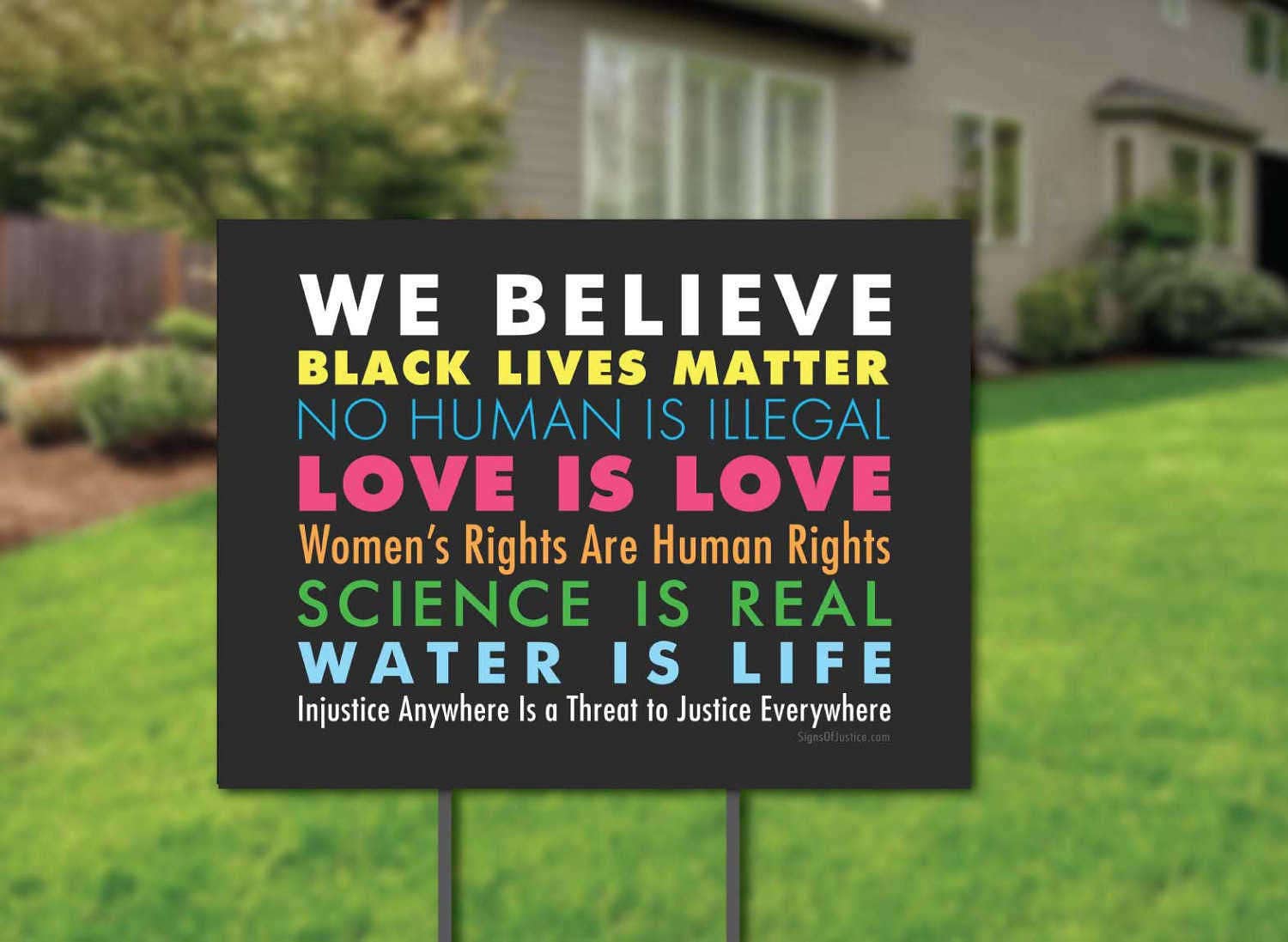 although BLM signs have recently given them competition. (Alas, for these people, they won’t save them if true believers come knocking on their white liberal doors.)

I never fail to marvel at the amazing degree of smugness the home owner must feel when he/she/cis hammers this in the front yard.The degree of self satisfaction must be off the charts.

Deluded is what comes to mind when I spot one and I spot a lot of them on my block and throughout the neighborhood. What a bunch of brain washed, closed minded people who spurn basic logic and reality! It is truly an exercise in patience and Christian love of your enemy to endure them.

A version of them happens on Nextdoor where anyone who strays from this philosophy is tongue lashed, branded a racist and then deleted.

At American Thinker Christopher Skeet breaks down each line of the sign:

Shortly after Trump was elected president, “HATE HAS NO HOME HERE” (HHNHH) yard signs began adorning the minority-manicured lawns of white-collar, white-skinned liberals. You’ve seen the sign. Its message is translated into multiple languages, which is meant to broadcast a globalist diversity of sorts by those who speak not only just English, but that sniffy dialect molded within the narrow confines of a university pedigree loftier than junior college but conspicuously short of Ivy League. You can all but hear them finish their Starbucks order with that irritating raised inflection on the last syllable.

The underlying message of the HHNHH yard sign is two-fold. First, it’s virtue signaling in its most tawdry form. Yard signs announcing “POVERTY IS BAD” and “I SUPPORT CURING CANCER” would ring just as hollow. Sorry, but you don’t get a cookie for broadcasting to the world that you oppose hate. Most people do, and their daily actions are sufficient proof thereof. A lion doesn’t need to convince people it’s a lion.

Second, the HHNHH yard sign alludes that a home which opposes President Trump is axiomatically hate-free, and, by deductive logic, a home which supports President Trump categorically welcomes hate with open arms. The sign smugly implies, “I’m a good person, and it’s a shame that you’re not.” This insinuation might not rise to the level of hate, but it certainly sinks to the level of arrogance, condescension, and sweeping judgment.

But over time the HHNHH yard signs faded along with the “I’m With Her” bumper stickers. The yard sign prophets needed something new, something snarkier, with which to impress their woke comrades and irritate the handyman who lives on the street’s only single story home. So a new yard sign was handed out that reads like a manifesto. The sign blares loudly “WE BELIEVE:”, which is followed by (in differing order, and with slightly altered wording, depending on the sign) BLACK LIVES MATTER; NO HUMAN IS ILLEGAL; WOMEN’S RIGHTS ARE HUMAN RIGHTS; LOVE IS LOVE; SCIENCE IS REAL; and KINDNESS IS EVERYTHING.

They really upped the ante, didn’t they?

Let’s break it down by statement:

Aside from progressive mayors, BLM rioters, and Dylan Roof, one is hard-pressed to find Americans of any political persuasion who behave like black lives don’t matter. In fact, conservatives take this statement to the next logical steps. Black lives, White lives and Hispanic lives matter. Unborn lives matter and police lives matter.

But by declaring BLACK LIVES MATTER, they are concerned only with black people who have been shot by police. The justification for the shooting, or the lack thereof, or any other pertinent fact of a specific case, does not factor into their reasoning. The black victim is merely a prop, brutishly exploited to peddle an anti-police narrative.

But don’t posit to a yard sign prophet any of these seemingly a priori statements without first donning a face shield, because spittle will most definitely fly. By insisting that all lives matter rather than just those of a single race, you are somehow the racist. Now that’s a trick that would leave even Houdini scratching his head.

NO HUMAN IS ILLEGAL

Who is saying that humans are illegal? It’s a conservative idea that human beings not only have a legal right to peacefully exist to pursue their happiness, but should be legally protected at all stages of life, at all income levels, and in every neighborhood. What this statement is attacking is the concept of illegal immigration. But a person’s immigration status is very different from their right to exist, as the yard sign prophets surely know. That is why they obfuscate the argument with underhanded statements like this. Those who scream NO HUMAN IS ILLEGAL do so from the safety of their alarmed homes and gated communities, which serve essentially the same purpose as does a border wall.

Who is saying they aren’t? Certainly not conservatives, for whom human rights (be they for women, gays, ethnic or religious minorities) aren’t conveniently ignored when the offending societies are non-Western. There are plenty who do treat women like animals and slaves, and who use their culture and religion as an excuse to do so. And which political party courts these misogynists and defends them against “phobic” criticisms?

The purpose of this statement isn’t to promote actual equality into cultures for whom the concept of women’s rights is tantamount to heresy. The statement is abortion advocacy, pure and simple, and it reflects the most threadbare ad hominem attack in American politics, i.e. if you oppose abortion, you oppose women. This would be news to Susan B. Anthony, Elizabeth Cady Stanton, Jane Addams, and other historical dreadnoughts opposed to abortion, in whose mighty wakes meander the empty vessels of contemporary “feminism.”

Sure. And broccoli is broccoli. The point of this hackneyed statement is not a defense of “love,” in the sense of a deep and selfless affection from one person to another. The purpose is to transpose the definition of marriage with that of love, i.e. if you don’t agree with the definition of marriage as progressives do, then you are opposed to “love.” If you disagree with the institution of gay marriage yet harbor no animosity whatsoever towards the gay community, it matters not. You are a hateful bigot whose business must be shut down and whose social life must be cancelled.

This hijacking of “love” as understood by the advocacy of non-traditional marriage in the Western sense is, like the advocacy of “women’s rights,” oddly ambiguous when the boundaries of acceptable marriage expand in directions seemingly at odds with progressivism. The LOVE IS LOVE windbags are uncharacteristically quiet about the legal codes in certain non-Western cultures which allow one man to have (own) multiple wives. Likewise, they are quiet about speaking out against (or for) definitions of “love” and marriage as insisted upon by the likes of NAMBLA. Whatever doesn’t fit the narrative is ignored.

Science is a process, a methodology employed to determine empirical facts and laws by which we can better understand the world around us. What science is never is a set of permanently settled, rigid theories that remain immovable despite the ebb and flow of conflicting evidence. SCIENCE IS REAL was just as true when we “knew” the Earth was flat as when we discovered it was round. What changed was not the science, but the evidence.

The SCIENCE IS REAL statement is a transparent reference to global warming, and global warming only. The statement is meant to ridicule “climate deniers”, i.e. those who “deny” the “settled science” that not only is the Earth warming at logarithmically catastrophic rates, but that mankind (particular Western man) is solely responsible. These armchair Einsteins have little time for the sciences of biology, genetics, and economics because they don’t conform to the narrative.

One problem with the global warming debate is that it, in its current metamorphosis, is far too politicized from which to derive much objective substance. The vast majority of partisans on both sides understand very little of the actual science, and instead rely on either conspiracy theories or internet searches for whichever article or chart is tailored to fit their particular bias.

Since I fall into this category of blissful ignorance, I’m in no position to comment on the science one way or another, though I will say this. Reasonable skepticism is not anti-scientific, especially when the apocalypse peddlers are batting 0.000 with regards to their predictions ever actually occurring. I’ll also say that any proposal that punishes Western democracies (who do the most to lower emissions) while subsidizing brutal dictatorships (who do the least) is not a serious solution, but rather a massive transfer of wealth and power unconvincingly cloaked as environmentalism. Pollution from Chinese smokestacks destroys the planet just as much as pollution from American smokestacks. This isn’t racism, this is the science you allegedly support.

This statement can be found in all shapes and sizes in the millennial-old texts of most world religions, but one would struggle to find anything remotely close in the atheistic fanaticism of Karl Marx, Che Guevarra, or Richard Dawkins. For cultural icons like Bill Maher, Chelsea Handler, and Michael Moore, kindness is more an impediment than a virtue, as are the empathy and tolerance that accompany it. Our city streets are overflowing with black-masked kindness, and it’ll bash you across the head with a brick if your own kindness is found wanting.

Like its HHNHH predecessor, the WE BELIEVE yard sign isn’t an argument, an ideology, or a philosophy. It isn’t a set of principles or tenets of a faith. It has no depth, no complexity, and no animation. It’s a regurgitation of drive-by gotcha-isms, dutifully parroted with overconfident arrogance and unearned righteousness by those who haven’t thought to the next sentence.

The WE BELIEVE statements are easily dissectible, and should never be allowed to fester unchallenged for the sake of avoiding unpleasant conversation. The yard sign is designed to elicit shame in its opponents, but there is nothing shameful and everything noble in resisting what Solzhenitsyn called “the mechanical propaganda of dead ideas”. You won’t make a dent, but they should know that neither did they.

When Trump is reelected expect a new slew of these to pop up.