There has been little talk about the third debate moderator, even after attention fell on the antics of Chris Wallace, Susan Page and Steve Scully.

All of them have been shown to be Democrat hacks. Outrageously obvious ones at that. They didn’t even try to hide their biases. Scully, scuppered because the viral debate idea was rejected by Trump, might have been the most egregious. He was caught supporting Never Trump in 2016 and his excuse that his twitter feed, in which he asked Trump turncoat Anthony Scaramucci for advise on besting Trump, was hacked has been disproved.

In other words, he’s a liar and a Democrat. Pardon my repetition.

The third moderator, Kristen Welker, has acted preemptively and removed her tweet feed. That alone suggests her bias. 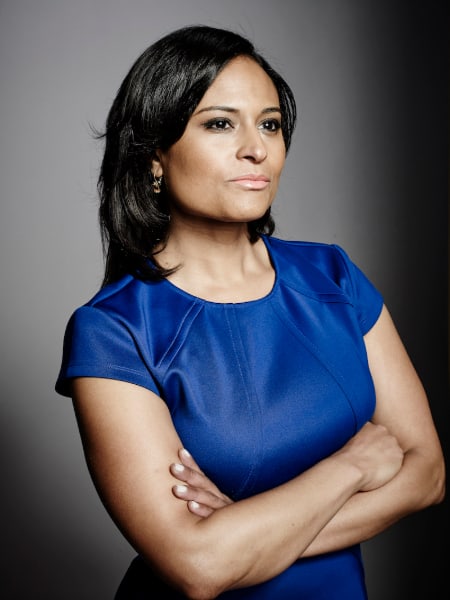 But you don’t have to make suppositions. She has already revealed herself. She works for NBC as White House correspondent and weekend anchor for Today. For the debate, she gets to choose the topics, which are then divided into six segments. I guess that cuts out foreign policy, immigration and education as it did with Chris Wallace. You can bet they’ll be plenty on race and Covid.

Speaking of race, Ms. Welker is half black and half Native American.

Here’s a sampling of how she’s treated Trump people in the recent past.

To Lara Trump, Welker posed this, “You’re accusing the Democrats of having a dark and gloomy message. And yet, President Trump said yesterday, quote, ‘I’m the only thing standing between the American Dream and total anarchy, madness, and chaos.’ Is that the message we can expect to hear from the president this week? And how is that positive, Lara?”

After Kamala Harris was chosen by Biden to be VP, Welker floated the conspiracy theory that Trump would dump Pence. “’Still, the Democrat’s diverse ticket is fueling the question among some Republicans, is the President considering shaking up his own team,’ she claimed, citing absolutely ZERO evidence,” according to Newsbusters…

“Welker suggested Trump was turning off voters with ‘personal attacks’ against Harris. ‘And some advisers think the President should stay away from personal attacks like the one in this tweet, ‘the suburban housewife will be voting for me.’ But Welker was telling a blatant lie, that tweet didn’t make any reference to Harris.”

“Biden’s campaign insists he was not suggesting the black community is a monolith,” she said. “But rather was ‘Referring to diversity of attitudes among Latinos’ when it comes to immigration.”
You can bet she’ll ride to his rescue in the debates, too.
As for Antifa and riots in Seattle, Welker was “aghast the President would criticize the group. She too skimped on the details and facts,” according to Newsbusters. “’Meanwhile, the President today lashing out at protesters including in Seattle where police are clashing with demonstrators in encampments,’ she huffed.

“Welker went on like that for 15 seconds and tagged on an unfounded conspiracy theory (or as she called it ‘a blunt warning’) from former Vice President Joe Biden, suggesting without evidence Trump was going to ‘steal’ the 2020 election.”

After a Fox News interview with the president, “Kristen Welker began her report by declaring: ‘With COVID cases on the rise all across the country, the pressure is intensifying on President Trump. Yet another round of polls show he is trailing Joe Biden.’

“As she wrapped up her hammering of the President, Welker made sure to match ABC’s eagerness in reading Biden campaign press releases:

“Joe Biden, who is leading President Trump by double digits in a new ABC News poll, responded to the President’s interview, Sunday, saying in a statement, ‘Your ignorance isn’t a virtue or a sign of your strength – it’s undercutting our response to this unprecedented crisis at every turn and it’s costing Americans their jobs and their lives.’”

So yes, you can expect Welker to hit Trump on Covid.

Welker “claimed, without evidence, that Trump was trying to stoke ‘racial tensions’ with the video and said, ‘Tonight, as protests for racial justice persist, the President is again stoking tensions on Twitter, sharing a video today of a white couple in an upscale St. Louis neighborhood pointing firearms and shouting at peaceful protesters,'” Newbusters reports.

In the last debate right before the election, Welker will hammer home Biden’s talking points.

There is talk that the Commission on Presidential Debates is dead after this season. I hope so. We don’t get a debate and we don’t get impartiality. Why do they happen except to help the Democrat candidate?