Harmeet Dhillon, Republican Committeewoman from California and an attorney herself, outlined the voter fraud claims of Sidney Powell concisely on Twitter.

It’s good that she boiled this down. The general public needs to know information they can readily grasp. The courts also need not to get bogged down on too much detail nor do they need to have claims that are too broad.

Dhillon does a good job of summarizing:

1/ Ok I’ve read the lawsuit filed by Sidney Powell’s organization. It contains many allegations familiar to those following these legal challenges, with two big themes: 1) numerous irregularities in vote-counting based on ad hoc law/procedure changes… https://defendingtherepublic.org/wp-content/uploads/2020/11/COMPLAINT-CJ-PEARSON-V.-KEMP-11.25.2020.pdf

2/ including putting ballots in the wrong stacks en masse, pre-printed ballots that were “pristine” and unlined; blocking Republican observers from vote-tabulation tables; counting votes after the so-called “pipe burst” election night even though there were no Rep. observers…
3/ And more… And the second big theme is that the Dominion voting machines are easily hackable and experts have written scripts to show how one can manually manipulate vote tallies, alter setting so as to put more ballots into a “question” pile and then just delete them…

4/ These are serious allegations, and maybe the evidence (some of it filed and some of it under seal provisionally) will persuade. Either of these big themes would be enough to change the election results given the narrow margin for Biden. To me, the easiest way to reach that…

5/ Goal is something much simpler alleged in the complaint at para. 121: That thousands of specific, identifiable voters, cast ballots after they moved out of state as evidenced in their registration in a national database, and may even have cast votes in their new states also — 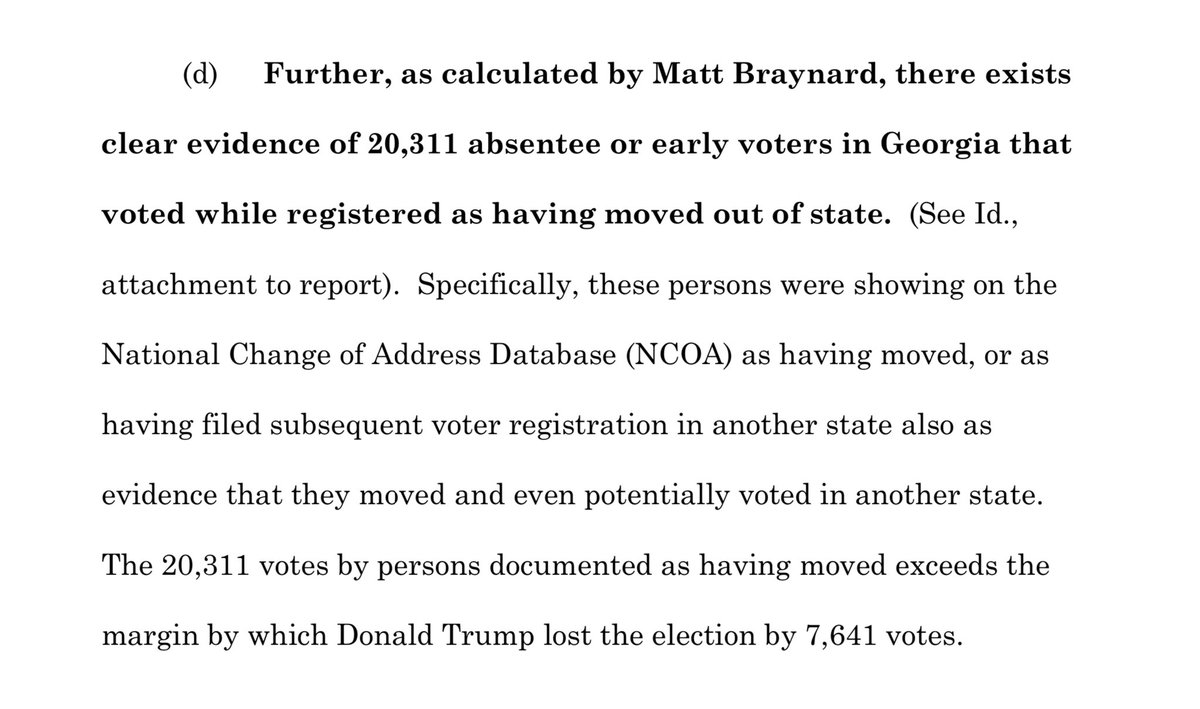 6/ which can easily be checked against the other state’s records. This accounts for thousands of votes. The other category @MattBraynard
has researched & documented, is thousands of identifiable, specific registrations at fraudulent addresses such as P.O. Boxes, non-residential/
7/ etc. — These seem to be specific and of a sufficient volume that their disqualification would affect the outcome of the election. I think this simple tack – much easier to grasp and prove than the more complicated theories — is compelling. To critics who say this is too late,
8/ it really isn’t. How are you supposed to allege that someone cast a ballot from a fraudulent registration address or after moving, before the election? This is something that can only be checked after the votes are cast and tallied, particularly where last-minute registrations
9/ are permitted by increasingly lax voter registration policies pushed by Democrats, followed by no signature verification or other safeguards, as the lawsuit alleges. I think these “Braynard” allegations have legs, and should be pursued aggressively. A court should want to know
10/ which thousands of specific, identifiable people illegally cast ballots in Georgia. I hope the federal court allows inquiry into this low-tech challenge even if it does not bite on the more expert-and statistically-based theories. There’s time to get this right, and we must.