Do you think a 781% turnout is unlikely in one voting precinct?

It would appear to be a little off.

According to an affidavit in the MI lawsuit, one Michigan precinct/township had 781.91% turnout. How does this happen?

Here’s a link explaining the fraud:

It is the affadavit of Russell James Ramsland, an expert on voting systems and the guy who advised rejecting Dominion for use in Texas. He saw the vulnerability in hacking and vote tampering in the machines. Ramsland has looked at the November 3 election in Michigan and doesn’t like what he sees.

A red flag is the 6,000 vote “glitch” that’s not a glitch that he saw in Antrim county. Also, public data reveals that 643 precincts got an 80% turnout.

He expects it will look more like this when more vote info comes out: 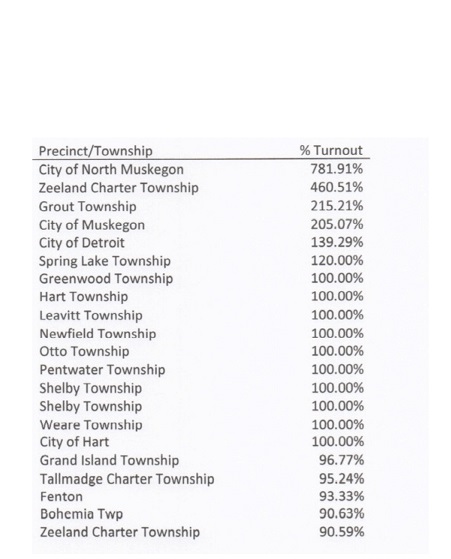 His report also says,
“Yet another statistical red flag in Michigan concerns the dramatic shift in votes between the two major party candidates as the tabulation of the turnout increased. A significant irregularity surfaces. Until the tabulated voter turnout reached approximately 83%, Trump was generally winning between 55% and 60% of every turnout point. Then, after the counting was closed at 2 a.m., the situation dramatically reversed, starting with a series of impossible spikes shortly after counting was supposed to have stopped. The several spikes cast almost solely for Biden could easily be produced in the Dominion EMS control system by pre loading batches of blank ballots in files such as Write-Ins, then casting them almost all for Biden using the Override Procedure that is available to the operator of the system…
“The final red flag is perhaps the greatest. Something occurred in Michigan which is physically impossible, indicating the results were manipulated on election night with the EMS. The event as reflected in the data are four spikes totaling 384,733 ballots allegedly processed in a combined interval of only 2 hours and 38 minutes. This is physically impossible given the equipment available at the 4 referenced locations. We looked at ballots processed and cross referenced the serial numbers and types of the scanning devices used at each location to determine the amount of ballot processing capacity per the equipment performance specifications. The Model DRM16011 processes 60 images/min without accounting for paper jams, replacement cover sheets or loading time, so we calculate 2,000 ballots/hr/machine in field conditions, which is probably generous. This calculation yields a sum of 94,867 ballots as the maximum number of ballots that could be processed… In any event, there were 289,866 more ballots processed in the time available for processing in four precincts/townships, than there was processing capacity.

“Based on the foregoing, I believe these statistical anomalies and impossibilities compels the conclusion to a reasonable degree of professional certainty that the vote count in Michigan and in Wayne County, in particular for candidates for President contain at least 289,866 illegal votes that must be disregarded.”

Quite damning. Read the whole thing and look at his graphs.