Former Nevada Senator Harry Reid may not exert his power in the halls of Congress anymore, but the petty, greedy, ethics free little man has not released the reins of power.

That’s what analysts say about him in Nevada, where he still calls the shots allegedly via intimidation, extortion and blackmail. You didn’t think the weasel from Searchlight, Nevada, would go away quietly, did you?

Here he is after some kind of scuffle allegedly with his brother. 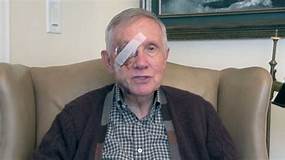 You can probably ascertain his handiwork in yesterday’s ruling against Team Trump’s case that voter fraud inflected their election. That it was an Obama judge who ruled just made it an easier task for him.

In his 35-page order, Russell wrote that he found the evidence offered by the Trump campaign to have “little to no value,” and failed to provide under any standard of proof that the campaign’s long list of alleged fraud and vote irregularities could be backed up under any evidentiary standard.

Here’s what he found of “little to no value”

We have 20 binders containing 8,000 pages of evidence that will be presented in just a few minutes showing what took place this election in Nevada! pic.twitter.com/oOEpl4HCCW

Many of these judges were pushed by the Soros people who realized early on that getting leftist/progressive judges in positions of power are worth the money you put in to electing them. Also state attorneys generals and local AGs. It was a savvy move, unfortunately for those who care about adherence to the law.