Average Viewers
6 am to Midnight 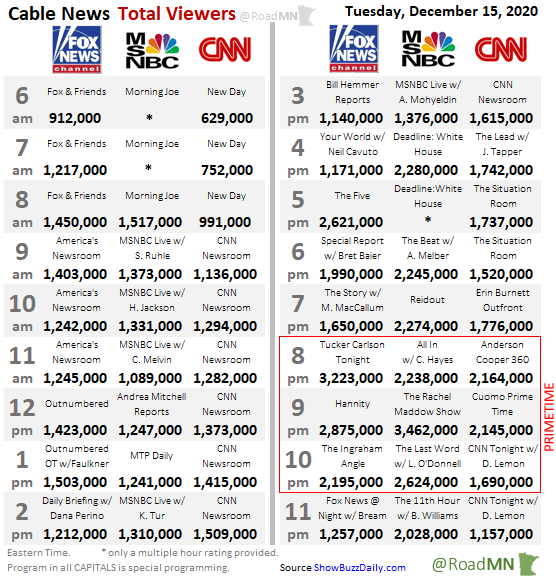 Fox News viewership has tumbled. It’s probably even worse than this chart. Ace of Spades writes, “A tipster notes that Bret Baier is under two million viewers, Laura Ingraham is barely above 2 million, Hannity is now losing to Maddow, Martha McCallum is in third place, and Walking CPAP Advertisement Neil Cavuto is basically a test pattern at this point. He’s below Dana Perino!!!”

Even President Trump has noticed. “Can’t believe how badly @FoxNews is doing in the ratings. They played right into the hands of the Radical Left Democrats, & now are floating in limboland. Hiring fired @donnabraziIe, and far worse, allowing endless negative and unedited commercials. @FoxNews is dead. Really Sad!”

Not dead enough for most of us.

Fox News has repudiated their best customers. Even the most dedicated fans have dropped them. Tucker Carlson may have a good show; Hannity may bleed red, but they’re on Fox, which has insulted its viewers and aided the Left. There is no coming back from that.

If some of their “stars” want to maintain their integrity for radio, podcast, book or other ventures, they will have to repudiate Fox. I understand the rationale of not letting your enemy completely take over, but this is different. Fox was in on the election night heist. They purposefully called Arizona prematurely to start an avalanche of swing state stopping vote counting. They daily attempted to throw the election to Biden. The Chris Wallace moderated debate was obviously biased. They listened to RINO and vengeance seeking Paul Ryan who they put on their board.

Then the wife of one of the Murdoch brothers, James, proclaimed “We did it!” when they prematurely announced Biden had won. As if on cue, other networks followed suit. What a surprise, eh? Think we didn’t notice, eh?

There is no coming back from this.

They have cast their bread with the Left and have ruined their franchise.

Don’t they know there are plenty of other choices now?

They have shown their stupidity by throwing away a golden ticket. They will never get out of the hole they dug for themselves.