Yesterday Missouri Republican Senator Josh Hawley released the MOAB in the fight against the fraudulent presidential election. He tweeted: “Millions of voters concerned about election integrity deserve to be heard. I will object on January 6 on their behalf”

Deplorables everywhere cheered. At last a Republican senator stood up for Americans.

But Walmart decided to insert itself in this raging fire. Someone replied: 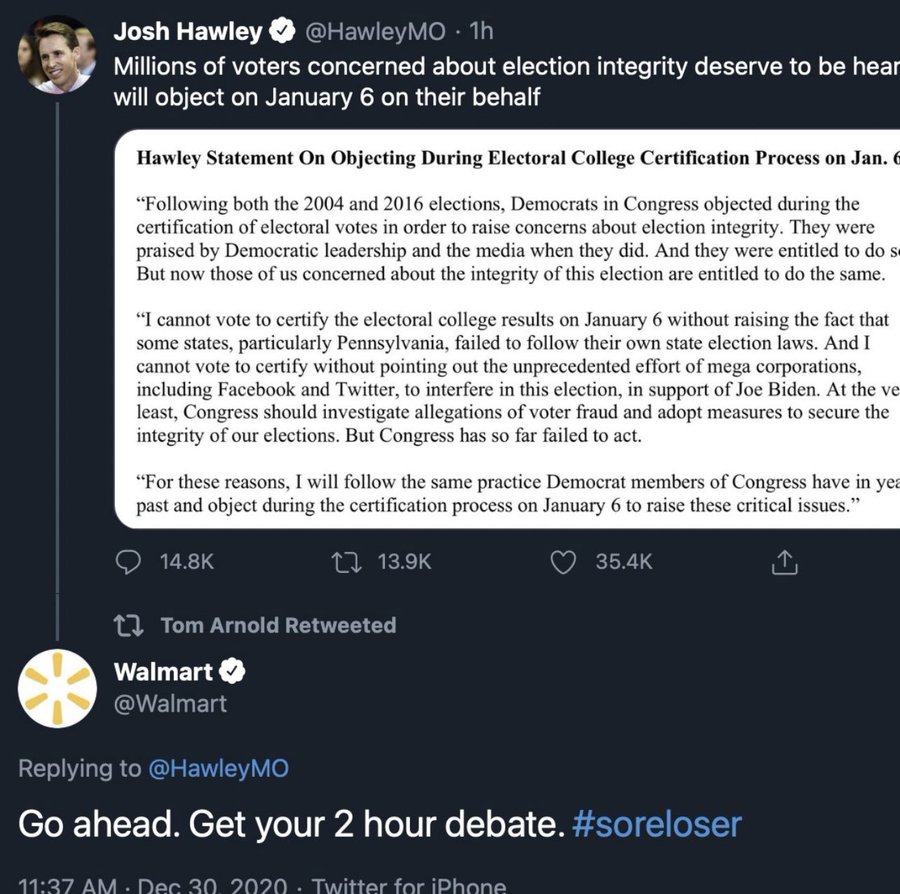 You could almost here the collective gasp from Americans. When more than half (in my belief) of the country voted for Trump, why would a company that supposedly appeals to blue collar workers – Trump’s biggest supporters – do this?

Hawley very succinctly responded, “Thanks ⁦@Walmart for your insulting condescension. Now that you’ve insulted 75 million Americans, will you at least apologize for using slave labor? and the pathetic wages you pay your workers as you drive mom and pop stores out of business.”

He later told Fox’s Martha McCallum (I don’t watch) “Somebody has to stand up. 74 million Americans are not going to be told their voices don’t matter.”

The hashtag #BoycottWalmart began to trend on Twitter. Walmart must have been feeling the heat because the company replied, “The tweet posted earlier was mistakenly posted by a member of our social media team. We have removed the post and have no intention of commenting on the subject of certifying the electoral college. We apologize to Senator Hawley for this error and any confusion about our position.”

Convenient to blame it on the social media team. Any of their team can post without an OK from someone higher up? Unusual to say the least.

Walmart is entwined with China. They get their cheap crap from there and they also have 1,000 stores in China that do well. Trump stands in their way. They want him out. Besides, the China virus has been a bonanza for them. They have upped their delivery service and cut a lot of their competition out. For them, what’s not to like about China? Plus, government has no objection to crowds at their stores; it’s the churches, schools and restaurants that bother them. Wonder why that is?

On Leftist media sites readers were celebrating. They suddenly found a new respect for an entity they previously hated. Many were praising the twitter poster and hoping he got a career advancement.

For Senator Hawley, this is an opportunity to take a look at China’s partnership with Walmart. And other corporations. See story below. That only scratches the surface of Chinese Communists involved in American institutions.

For the rest of us, we are done with Walmart. They are not as popular as the company perceives. Most stores are dirty, unorganized and with help that isn’t much help when you are looking for something. Have you ever been when all checkouts were open? Why do they have so many only to let them be idle?

Good bye Walmart. We won’t miss you much at all.
Let’s see how you like your new China masters.