He can be their worst nightmare. A president who is still popular and still commands the hearts and attention of 80 million Americans.

The Russia hoax, the Ukraine impeachment, the massive vote fraud, the rigged second impeachment have not changed Americans’ opinions of Donald John Trump.
Rasmussen sees no slip in support for President Trump. Do you know anyone who likes him less than in 2016? Than in 2018? 2020? No. Instead they like him more. 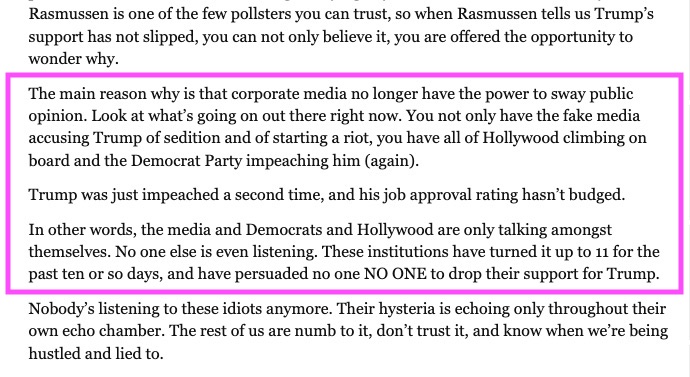 This is probably worse for the GOPe than it is for Democrats.

Mitch McConnell may have thought he’d run Trump out of town, but the pathetic former Senate Majority Leader has given up his status for nothing. He has cemented Trump’s popularity. The GOPe and the Dems have martyred him and thus created a popular hero. The people know he’s for them and this just enshrines it.

The Deep State has not won. On the contrary, we now see that they exist. That they even flourish. That they decide our lives without any input from us. It’s as if Adam and Eve discovered they are naked. There is no coming back from the reality.

Deep Tech may have banished Trump from their paradise, but he will find other ways to communicate with his base. In fact, when he does talk, tweet or make a video, Americans will be ten times as likely to watch it as they might have should he have just become an ordinary retired president. Publishers have banned together to stop anyone publishing his memoirs. Are they nuts? He can self publish and 50 million Americans will buy a book in which he talks about who betrayed him and who is dirty.

And if, as they probably will, they continue to martyr him through conviction of impeachment, lawsuits, boycotts of his company and whatever else the corrupt Lawfare group that runs our country can come up with, that will further ensconce him in our hearts.

Did they forget, too, that he has scads of family members and friends ready to take the baton in 2024 or beyond?

As always, the Dems and the Deep State have overplayed their hand. We now know what they’re up to. Do they know what we’re up to? That will keep them awake nights. It will also have them turn on one another. That part should be fun to watch.